The latest news in literacy, child development, and all things Easyread View all posts
Get a 10-Lesson Easyread Trial
Read Our Backstory... 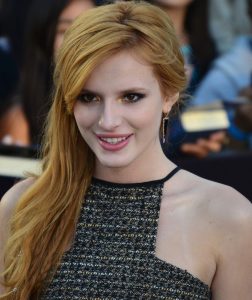 Bella Thorne, an American actress and singer who started out her career as a young teen, is one of the most outspoken dyslexia advocates in Hollywood. Despite her young age (19 at the time of this article’s publication!), she has already started writing her first book in a planned series, called Autumn Falls. And that’s on top of appearing in numerous TV shows and films!

In a recent interview, she explained her regrets at leaving school early because of her dyslexia. From ages 8 to 12, she worked on learning outside of the school system, and says that she missed the support that a school environment could provide.

But nothing can hold this young lady back. She has one strong message to dyslexic children around the world: you can do it.

“I never thought I would be an author. I’m dyslexic so growing up with that, people told me ‘oh that would never happen for you, you can’t read,’ and I actually never wanted to be an author because I hated reading so much when I was younger. But as I got older, I just really wanted to prove to my fans that if I can do something that I’m not supposed to be able to do, then you can do it too…You can go out there and do anything you set your mind too. This is so difficult and yet I did it with one of the most famous book publishing companies in the world. It’s crazy to think about how you don’t think you can do something but then you put your mind to it.”